A biography on the life of Sir Donald Bradman.

Donald Bradman is universally considered the best batsman in history of cricket and is an aspiration for many aspiring and professional cricketers all over the world. He remains one of Australia’s most popular heroes.

He was born in Cootamundra, NSW on 27th August 1908 into a strictly Methodist family, a practice which he strongly upheld throughout his life. As a young boy he was known for his obsessive practice that consumed hours of his life by hitting a golf ball against a water tank with a cricket stump; an activity that was very technically difficult and time consuming. However this practice is said to have shaped his cricketing skills and allowed him to play at such a high level of cricket.

During his later primary school years, he was selected to play for the Bowral High School team. At 12 years old he scored his first century (100 runs) as the number 3 batsman for the Bowral High School Team, and as a reward, they gifted them the bat that he used to score his century and offered him a permanent place on the team. This was a turning point for Bradman, as he started to receive a considerable amount of attention from the local press and

At this time Bradman also started to play tennis and represented Bowral in the field, and after a brief dalliance with tennis he dedicated himself to cricket, playing for local sides before attracting sufficient attention to be drafted in grade cricket in Sydney at the age of 18. Within a year he was representing New South Wales and within three he had made his Test debut.

After receiving some criticism during his first ashes series in 1928-1929 series, Bradman worked tirelessly to overcome these weaknesses. Critics described his batting style as, “a great stillness whilst awaiting the delivery, his shot-making was based on a combination of excellent vision, speed of both thought and footwork and a decisive, powerful bat motion with a pronounced follow-through”. This advanced and technically brilliant style later went on to shape Bradman’s career and legacy in the sport.

Despite frequent battles with illness, he continued to retain his remarkable batting statistics until the outbreak of war in 1939, but even then Bradman continued to “raise the spirits” of many cricket fans worldwide.

His international cricket career lasted an astounding eighteen years, his achievements were unmatched by any other cricketer before. He was the first cricketer to:

·      He had the highest test and first class cricket scores

At 39 years of age (after the age most cricketers retire), he returned to play cricket at the conclusion of WWII. Captaining arguably the best team in Australia’s cricketing history, for his farewell tour in England, 1948. Following the tour, the team (commonly known ad “The Invincible’s”) returned undefeated; a feat that has never been matched before or after.

During his last international innings on the tour, he needed 4 runs to achieve a batting average of 100, instead he received a score of ‘0’, but his batting score of 99.94 after 52 tests, is still over double that of an average batsman and retains its status of the highest batting score in history. Many fans claim that it was the tears in Bradman’s eyes that caused the low score but he dismissed claims stating, "I knew it would be my last test match after a career spanning 20-years but to suggest I got out as some people did, because I had tears in my eyes is to belittle the bowler and is quite untrue."

After retiring from playing formal cricket, Bradman was knighted for his services to cricket in 1949; he remains the only Australian cricketer to receive a knighthood for services to the game. Later he received the Companion of the Order of Australia Award, which is the highest civil award in the nation.

Bradman married the woman he had been dating since he was in high school, and they had 2 children. They were very secretive as a family, and Bradman intentionally shielded his children and wife from the media, too avoid the medias scrutiny having an impact on the children. 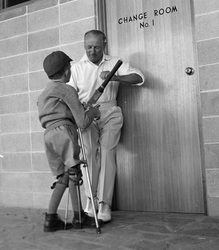 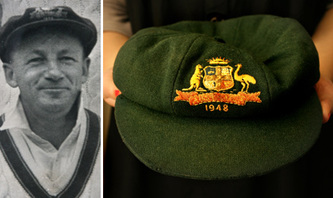