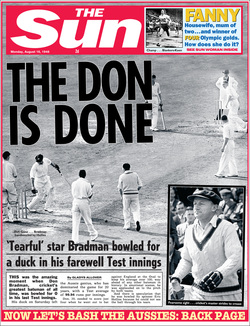 News Article after Bradman's Final Test Source: http://www.thesun.co.uk/sol/homepage/hold_ye_front_page/historyofsport/2703441/red1948red-blueSir-Donald-Bradman-other-batting-legendsblue.html?print=yes
The Donald Bradman Legacy has been crucial in shaping the Australian legacy and the thoughts and feelings of a country at a difficult time period in history. Bradman was often described by others at the time as a 'bright star,' owing to the way he inspired people, even in the most desolate of times. This legacy still lives on today, and people from all over the world still aspire to be anything like Bradman, both with his skills and sportsman like behavior.

He was regarded as a ‘gentleman’, playing with integrity and dignity. When asked to describe a true sportsman, he followed with, “When considering the stature of an athlete or for that matter any person, I set great store in certain qualities which I believe to be essential in addition to skill. They are that the person conducts his of her life with dignity, with integrity, courage, and perhaps most of all, with modesty. These virtues are totally compatible with pride, ambition, and competitiveness.” Bradman encompassed all of these heroic like qualities, and was a supporter of all cricketers and encouraged sportsman like behavior over all other aspects of the sport whilst he was captain. His legacy of sportsman like behavior is still evident in the Australian Cricket team and they still aspire to his high standards of sportsman like behavior.

Bradman also has a legacy as the greatest batsman in history, with a test average of 99.94. His legacy is that of an outstanding athlete whose ability is unlikely to ever be matched in the field of cricket. He has been regarded the best in every team that he has ever been in and combined with his sportsmanship, he has left a powerful legacy that is unmatched. His legacy is so influential because of the way he didn’t let his ability ‘go to his head’ or his personality and humble nature wasn’t overpowered by his achievements.

The legacy of Sir Donald Bradman has been compared to the legacy of Winston Churchill the Sydney Morning Herald releasing a contrasting piece of the two figure heads, it stated, “He [Bradman] gave his people the spirit to keep on fighting when defeat looked inevitable, Bradman was also seen as the symbol of his country's indomitable spirit”. The legacy that came from the “Boy from Bowral” was more powerful than that of any other figurehead in the time period. The name gave people hope and united Australia in harsh times. This is the power of the Bradman legacy. When the sports association of Australia named Bradman the most influential sportsman of the past 200 years, it is a true demonstration of the power that Bradman had to inspire and instill greatness in a nation.

The Bradman legacy, is encompasses all of ‘what it means to be Australian’, meaning that the result of Bradman and all of his achievements, allowed Australia to become united as a nation and helped shape the thoughts and feelings that define Australia.