Rise to Fame and Prominence 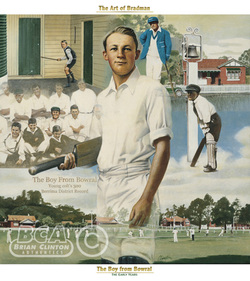 Artwork depicting Bradman's Life http://www.brianclintonauthentics.com/prints_files/print_theboyfrombowral.html?keepThis=true&TB_iframe=true&height=475&width=750
During his childhood, Bradman was a scorer for his Uncles cricket team, and during the 1920-21 season, was taken to the Sydney Cricket Ground by his father. While at the match he said, “I will never be satisfied, until I play on this ground.” This laid the foundation for Bradman’s drive to move forward and play the game of cricket at such an impressive level. It is what is said to inspire his incessant and obsessive practice.

After leaving school in 1922, he started work at a real estate agent. Although being a top agent in the area, Bradman’s boss encouraged his sporting endeavors, and often allowed him to have time off when necessary, to support his sporting career. At this time, Bradman was involved in two sports at the time: tennis and cricket, and he was allowed time to partake in both activities.

He was regularly selected in the Bowral District Cricket Team, and his outstanding performance at all games earned him the attention of the Sydney Daily Press whilst playing in the Berrima District Competition. During his first season, he scored 234 against Wingello, playing against a team consisting of players such as future test bowler Bill O’Riley. He also scored a record of 320 not out against Mona Vale, this was a record for the competition. This allowed Bradman to set a benchmark for his playing and standards of competition.

In 1926, when Australia lost the Ashes series in England, a substantial amount of test players retired, this caused Cricket NSW to start searching for new players with great amounts of potential. This caused Bradman to be invited to play in the “Country Week” tournament for Cricket. However at the same time, a tennis tournament was also being played ultimately making Bradman choose between the two sports and choosing cricket for his passion, driven from his early childhood experienced with the game.

During the week, his outstanding performance allowed him an invite to play for the St George First Grade team in the 1926-1927 season. Although this was a difficult time for Bradman (travelling 130km every weekend to play), his passion and love for the sport and his determination to make it in the sport allowed him to succeed at such a high level.

In the following season, Bradman was selected to replace Archie Jackson in the NSW team. He made his First Class debut at Adelaide Oval at the age of nineteen, with an innings of 118. In his final match for the season, he made his first century at the Sydney Cricket Ground. This was a defining moment, as he now felt satisfied with his accomplishments as a cricketer. Despite his performance, he was unable to make the Australian team during that season.

During the 1928-1929 season, Bradman decided to move to Sydney in order to give him a greater chance of making the Australian team. This season he scored an incredible 451 with his batting partner Bill Ponsford, breaking numerous records, this made both young cricketers a regular appearance on the Australian side. During this season he broke the previous records and scored 112 in the third test at the Melbourne Cricket Ground, this made him the youngest player ever to score a test century. By the end of the season he had set the record for First Class Cricket, scoring 452 not out, and the tabloids famously named him “The Boy from Bowral”.
Powered by